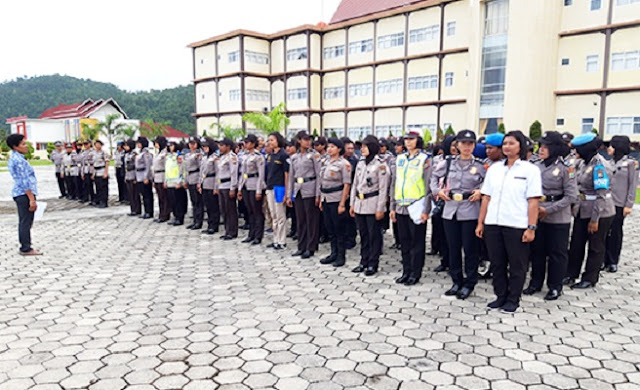 INFONEWS.CO.ID ■ West Papua Regional Police Chief, Police Brigadier General Rudolf Alberth Rodja forbade the Police of Papuan women who have curly hair to do hair rebonding, which is the process of hair straightening.

"I forbade all Policewomen at the West Papua Regional Police to rebonding their hair. Because you have to be able to display the characteristics of a Papuan The beauty of Papua with its iconic, "Rudolf said to a number of journalists, after the apple of the security forces for the 2019 election, recently.

According to Rudolf, curly hair possessed by policewomen cannot be changed in shape, because it is already a gift from God.

"Try you (reporters) asking Polwan, dare not he give you rebonding his hair again. "Obviously I will move him to a place that people in remote areas don't see," he said.

Previously, said Rudolf, many Policewomen who have curly hair like rebonding. "But after there was a rebonding ban from me, many returned their hair as before," he said.

According to Rudolf, due to this ban they already knew the consequences. "So see now that a lot of hair has returned curly. But there is still one more person whose hair is still straight, and I have told him quickly. If not, then you move to Kaimana, "he said firmly.

Rudolf claimed to ban rebonding because he did not want a female police officer who did not want to recognize his identity as a Papuan. "Let Papuans have curly hair. Yes, curly. If it is set with good hair styling, it will look beautiful, and it is beautiful Papua, "he said.

One of the female police officers, AKP Agustina, whose daily life is as Head of Unit II Sub-Division I Kanit Dirskremum Polda West Papua, confirmed the prohibition of female police in West Papua to do rebonding.

"It is true that the Regional Police Chief forbade this. Therefore the form of attention to the regional princess. "The police chief does not want because hair rebonding is finally our uniqueness and characteristics as female police officers without realizing it is gone," said Agustina, yesterday.

According to Agustina, doing hair rebonding can be the same as doing genocide. "Black skin and curly hair. This is our characteristic as Papuans. That is a gift that must be preserved, what God has given us, "he said.