Tawhid was pronounced by Ustadz Abdul Somad for Prabowo - INFONEWS.CO.ID -->

Tawhid was pronounced by Ustadz Abdul Somad for Prabowo 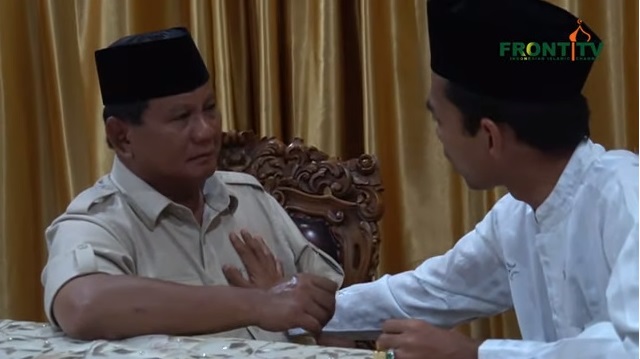 INFONEWS.CO.ID ■ Ustadz Abdul Somad gave a gift to presidential candidate Prabowo Subianto in a dialogue broadcast by a television station on Thursday afternoon (04/11/2019).

The prize is in the form of perfume and a tasbih. According to Abdul Somad, the prayer beads are his favorite prayer beads that he bought from Medina.

"You can't empty your heart, you have to do a lot of dhikr," said the UAS.

He advised that Prabowo did not need to carry the prayer beads in front of the public. "You don't need to hold this in front of a lot of people, you will be risked by people imagining it," UAS ordered

"You just have to pray for the evening prayers while you do the dhikr, remembrance of the sentence La Ilaha Illallah," he added.

"Prayer beads in the mouth and followed by appreciation in the heart," said UAS, while his right hand holding Prabowo's chest while from his mouth continued to say remembrance La Ilaha Illallah.

Prabowo wiped his eyes several times like crying. After the tasbih was bagged by Prabowo, the UAS said that all matters were left to God Almighty. "What happens after this we submit to Allah SWT," he said.

After that, UAS led a closing prayer for the good of the nation and the presence of a just leader.