Seeing the replica of the Borobudur Temple in Gianyar Nusa Bali - INFONEWS.CO.ID -->

Seeing the replica of the Borobudur Temple in Gianyar Nusa Bali 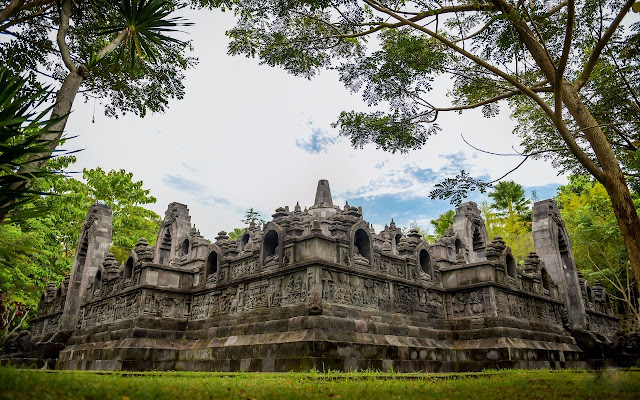 INFONEWS.CO.ID ■ Life continues as water continues to flow in search of form and natural law. When humans are familiar with writing and living traditional technology, human intelligence develops and changes towards a more perfect civilization.

Historical evidence is widely spread and found in Javanese land in the form of inscriptions, monuments, temples and old documents. One of the biggest is Borobudur Temple.

Now you are looking at a replica of the temple which is one of the wonders of the world, which is in Magelang Regency, Central Java, or about 30 Km from the city of Yogyakarta, the name Borobudur Temple.

Borobudur Temple was founded by Wangsa Syailendra named Prabu Samaratungga in the 9th century and originated from the Mataram Kingdom of Medang Kamulan. The architect was named Gunadharma and Kumaragosa. The construction of the largest Buddhist temple in the world was continued by Princess Samaratungga named Sri Kahulunan Dyah Pramodawardhani.

Borobudur whose real name is Bhumi Shambara Budhara is in the form of punden berundak, with levels including: Karmawibangga, Kamadatu, Rupadatu, Arupadatu and Bodisatwa. The painting on the temple wall is a historical story of the journey of Sidharta Gautama (the Buddha) which must be read in the direction of the inverted clock.

The replica of Borobudur owned by Taman Nusa is made from the original stones of Mount Merapi and is done by sculptors from around the Borobudur and Muntilan temples. If you are around the replica of this temple while taking pictures, people will think you really are in the Borobudur Temple which is actually in Magelang.

So what are you waiting for? Let's learn and recognize the richness of Indonesian culture while enjoying the natural beauty of Bali at Taman Nusa.